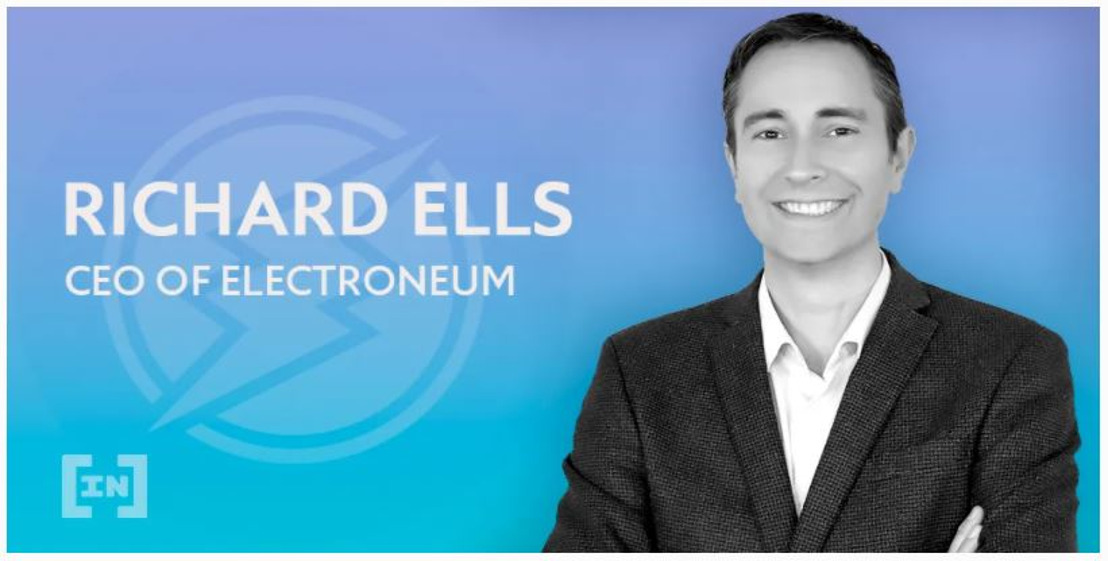 Hello Richard, thanks for taking the time to chat with us today. Could you introduce yourself to our readers?

I have run a number of successful digital companies since 1996, and in 2015 when we started to develop Electroneum I already had a team of coders who loved the challenge of deep diving into a new technology. We wanted to make cryptocurrency accessible to the masses and to do this, we knew we had to get it on to smartphones. We didn’t want to create a token-based on Ethereum, which would have been infinitely easier because we knew that we needed our own blockchain to allow us to grow in the future and take whichever direction the project needed. We launched the Electroneum blockchain and smartphone app in 2017 after a successful ICO. This ICO, to date, holds the record for being the largest in the number of participants, over 115,000.

What’s the plan with Electroneum? How are you planning to get Electroneum into the hands of the users?

Electroneum is already in the hands of more users than 99% of cryptocurrencies because we’ve made it so easy. Our free Electroneum smartphone app rewards people with a little ETN just for using it. The project is operating in phases and the first phase is well underway with us gaining over 3 million registered users by giving away a little ETN to those getting involved (up to a few dollars-worth per month). The second phase has started and there are currently two countries in the world (Brazil and South Africa) where you can top up your mobile airtime and data directly from the Electroneum app – directly in ETN. The list of countries will grow in the coming months as we continue our phase of expansion. The third phase launches at the end of 2019 and is arguably the most exciting part. The launch of GigFair will unlock access to the global digital economy for hundreds of millions of potential users. GigFair is similar as Fiverr in that it enables people to sell their digital skills to a global audience, but for the first time in history the buyer can use a credit card and the seller can be paid in ETN cryptocurrency – at very lows fees.

What would you say has been the biggest success so far for the project?

The biggest success has been creating a medium of exchange that’s genuinely easy to use with zero technical skills. Having our instant payment system has given it real-world usage above 99% of other cryptocurrencies. This, in turn, has enabled us to grow an incredible community that is passionate about the success of Electroneum. One of the biggest crypto communities in the world.

In 2019, is Electroneum still the world’s fastest mobile cryptocurrency?

In blockchain terms, we are right up there with the fastest, as we don’t need to worry about block confirmations with our “Proof of Responsibility” blockchain protecting us from 51% attacks. Our instant payment system from the app certainly makes us the fastest way to pay with cryptocurrency via mobile that I’m aware of. This has lead to huge interest by real users and I am confident we are a top-five cryptocurrency by real-world usage. People can take a look for themselves. We’ve installed the Alexa certified metrics app on our website, so the numbers that are reported are verified by Amazon as genuine. Check our traffic against other projects via Alexa and you’ll see we have more interest than anyone outside the top few cryptocurrencies that everyone knows.

How are people using Electroneum in 2019?

Currently, it is early days for on-the-ground usage – but where we’ve launched in South Africa where we’ve seen plenty of real-world usage including haircuts, small vendor payments for everyday food items, taxi rides, and many more things. Brazil has just gone live with airtime and data top-up via the Electroneum app and have plans for further expansion there, which we will announce later this week.

Electroneum has almost 3.2 million registered users, that’s impressive. Which countries have you seen the best uptake in?

We saw the largest natural, viral growth in Brazil, which is why we concentrated on getting direct ETN to airtime mobile top-up there as a priority. We have lots of interest in India, South East Asia, and other South American countries.

Following the release of the $80 Electroneum M1 smartphone, how did the ETN economy change?

The launch of the smartphone was exciting – but we are still waiting to get it into shops around the world. We’re working with many distributors to try and roll it out en masse.

We see that you recently teamed up with Ubuntu Pathways, an NGO operating in South Africa. Are there any other trusted ETN miners you would like to mention?

We are only announcing our NGO miners as they go public themselves. Internally we call them validators as they run and validate the ETN blockchain. Another NGO that has publicly stated that they are benefiting from being part of the ETN blockchain network is The Wonder Foundation (https://www.wonderfoundation.org.uk/). Over time, as the other NGOs realise the benefit of helping to operate the ETN blockchain they will publicly tweet or post their support and we monitor them all to enable us to share that information with the community as soon as we see it.

How has interest in Electroneum changed after launching the new Electroneum moderated blockchain?

Technical and commercial interest has certainly been increased by our latest fork to a totally new standard of blockchain. The co-inventor of blockchain, who was mentioned in the original Bitcoin whitepaper, has recently praised our blockchain development. Google Electroneum Dr. Scott Stornetta. See this article.

This year we have seen dozens of new projects promising to provide access to financial services to the unbanked. What would you say is the major obstacle this new industry will face is?

It’s important to remember that the “unbanked” don’t see themselves as “unbanked” or lacking in anything. The developed world might see them as lacking in a facility, but if you think about it, what purpose would banking have for them? If they earn a day’s money in cash and spend that money on food and their family, there is no purpose in putting that money into a bank.

This is especially true in many locations where bank accounts have a cost associated with them, so there is even more disincentive to use them. What we have discovered, and are well on the road to delivering, is that we need to create a system that gives them the ability to earn more. It’s the ability to open the global digital economy up and allow the “unbanked” to earn more and then we will see the true growth of cryptocurrency into a sector that has largely ignored it.

GigFair launches in Q4 2019 – a gig economy site allowing anyone in the world to carry out small digital tasks from the simple to the complex and be paid in ETN. The great thing is we’ve worked out how to allow buyers to purchase using their credit card, so there is no technology barrier at either end.