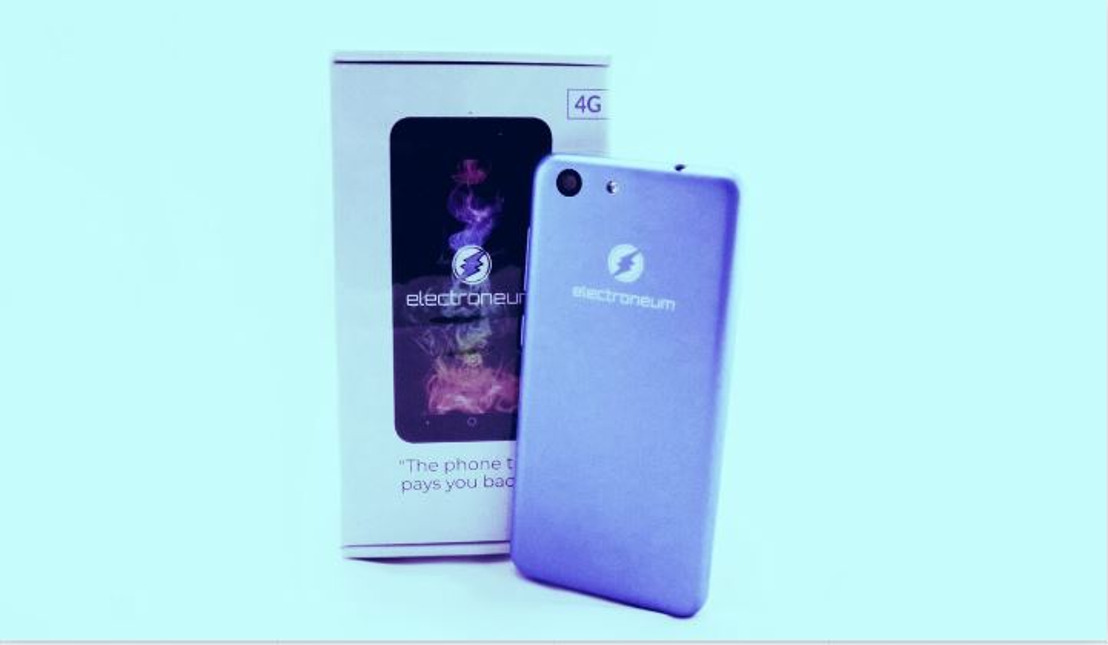 By Adriana Hamacher / Published by Decrypt

Almost exactly a year ago, Electroneum became the first blockchain startup to join the mobile operators association, GSMA. Its novel app initially enabled Android, and later iOS mobile phone users, to mine crypto.  At Barcelona’s Mobile World Congress, which opens today, the UK-based company is going one step further: It’s unveiling its own, GSMA-approved, low-cost phone, targeted at its growing customer base in the developing world.

Electroneum is a “mobile-based payments solution” that relies on its own cryptocurrency, ETN. The company says that its mining app is used by nearly three million people to mine ETN on their smartphones. The company is on a mission is to simplify cryptocurrency for people with limited education and means, give them a fast, easy way to transfer digital money and tap into the developed world’s $3 trillion market for digital goods and services.

Electroneum’s smartphone costs $80, roughly the same as a higher-end, reconditioned smartphone with the same features.  (More on the M1 phone in our separate news story here).

But the glue to cement Electroneum’s plans for mass adoption lies in the many industry partnerships which it’s been chipping away at for the past year. To that end, the company is also announcing today a field trial in South Africa, with local mobile operator, The Unlimited, as well as industry-compliant KYC (Know Your Customer) identity checks, which it introduced at the end of the year.

Electroneum’s founder and CEO, Richard Ells is hoping all of this will lure more mobile operators into Electroneum’s embrace. We interviewed him recently about his plans for mobile-crypto, world domination.

The cost of simplicity

The idea for Electroneum came to Ells in 2016, a year after he started experimenting with mining cryptocurrencies. That was when realized that the wider world didn’t have a clue how crypto mining worked; the fact that one needed specialized knowldge and powerful hardware put it out of the reach of most people.

“The smartphone is ubiquitous now, so I thought: if this worked on smartphone, we could have something that would change the world; everyone could suddenly access this thing,” he says.

Initial testing took place in the local school playground. Electroneum found a bunch of pre-teens (they had to give some of them phones) and got them drooling over the app. “One of them sold their sandwich to another one to get some more coins,” Ells recalls fondly.

Electroneum aimed to develop an app that was super simple, with big buttons and minimal knowledge required. Its patent-pending payment integration API, allowing vendors to easily accept cryptocurrency, follows the same principle and even looks similar to PayPal’s. “We’ve taken out all of the horribles that blockchain has, like orphan blocks and confirmation numbers, they don’t need to understand it,” says Ells. “The man on the street—your average day-to-day person—just needs things to be simple.”

This comes at a cost. Indeed, critics have accused Electroneum of misleading users by calling what’s going on “mining,” when, actually, users are given pre-mined ETN every so often, rather like a regular airdrop. They question, also, whether Ells is anything more than a consummate marketer.

Ells counters that his background is tech, first and foremost. He says the team tried the cryptographic mining that takes place on bitcoin and ethereum. It’s impossible on a smartphone; the computational intensity reduces it to a slag heap of plastic and glass. “I almost canned the project, he admits. Instead, Electroneum created a “mining emulation.”

Electroneum launched in 2017, after raising $40 million in its initial coin offering. As a sort of homage to bitcoin, it too started off with 21 million coins that will one day be in circulation, but describes itself as a unique cryptocurrency in that it has both open-source blockchain code and proprietary code that runs the back end.

This includes the app, the instant-payment system, and the custodial wallet. But Ells argues that this feature is what makes Electroneum a success, a business that corporations and governments can feel comfortable with.

He’s also betting that, if he gives enough people ETN, it will ultimately become a currency of choice. The next stage is to give them something to spend it on. That’s where partnerships, with mobile operators, come into play.

Airtime is a prime commodity in much of the developing world. Because large swaths of Asia and Africa are “unbanked,” plenty of savvy entrepreneur-types have set up as agents. They buy airtime from operators in bulk and sell it within their local community (by text-messaging it across.) “That’s how virtually the whole of Africa works in terms of top up,” explains Ells. Giving away $2-3 per month in ETN virtually pays for someone’s airtime.

The cost of airtime is negligible for operators, he argues; they sell it for a big markup, so can absorb the volatility which characterizes cryptocurrencies. Electroneum’s strategy is to partner with the mobile operators in every region.

However, this objective is seeing mixed results. While Electroneum has at least 30 deals “in the pipeline,” according to Ells, only a handful of operators (seven, by our estimates) have committed to the project. Electroneum’s not saying.

Mike Short, who for 17 years was VP at telecoms,Telefonica, and is now chief scientific advisor to  the UK’s Department for International Trade, is not convinced that the startup has demonstrated any real benefit yet to regional telecom providers. That explains the lackluster uptake, he said.

“Electroneum does not show an understanding of customers, the benefits of cybercurrency to operators [or] indicate where they will add actual value to what the mobile sector already does (e.g. identity, traceability, saving of overheads and reducing fraud),” Short said via a messaging app. But he added that the industry is not averse to the notion of cryptocurrencies. Electroneum—or someone else in cryptoland—simply needs to make a better case for it.

“A phone that pays you back”

Electroneum, meanwhile, is trying to do just that. It’s hoping that its new  “phone that pays you back” by enabling crypto mining will capture the attention of telecom providers in the developing world, who will see it as filling a need among its struggling consumers.

There’s excitement too about a new field trial in South Africa which could lead to rollout throughout the nation. Electroneum’s partner, The Unlimited, has a modest 200,000 of South Africa’s 37.5 million mobile subscribers, but the startup asserts that the mobile operator is growing fast.

Ells wants to position Electronuem at the center of small, remote communities in countries such as South Africa,  where “mom and pop” operations sell food and other items, as well as airtime. ETN, he believes, could well get a footing as a medium of exchange.

Trials are also progressing in Turkey, Hong Kong and South Korea, and Electroneum has been busy introducing other new features.  In December, it added HitBTC to the exchanges listing ETN. And last month, it launched its app on iOS with a new feature called “cloud mining,” so that users can mine ETN without Internet access. It also announced a “Gig Economy” website to let users sell their skills.

But while governments and big corporations will appreciate Electroneum’s new KYC and AML (anti-money laundering) compliant policy—in place since the end of last year—users may not be so keen. To remedy this, the startup has tried to simplify matters by offering a tiered system, with no checks needed for transfers of less than €150 in three months. That category fits 98 percent of Electroneum’s customers, says Ells.

Ells says Electroneum has got momentum among its users, who, he claims, enjoy better “user engagement” than any other cryptocurrency.

KYC/AML compliance also puts Electronum ahead of its competitors, Ells claims. (Though rival cryptocurrency, Dash is making good progress in South America.) AND Electroneum faces plenty of competition in the developing world.

In Mongolia, for instance, the government and mobile operator, MobiCom have partnered with blockchain-enabled payment system, Terra for field trials. The venture is backed by the world’s four leading crypto exchanges and plans to introduce a stablecoin, with its value pegged to the Mongolian national currency.

Telecom operator and government Interest in cryptocurrencies is starting to heat up. But as tens of thousands of tech and telecoms executives descend on Barcelona this week, Ells will need to convince them that he is more than a smooth-talking operator.